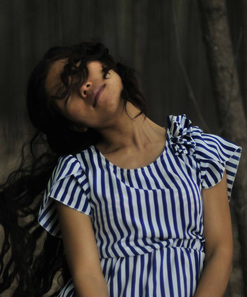 
Zhu Yu was born on March 8, 1981, in Liushi Town, Wenzhou, Zhejiang Province. In 2008, she graduated from the Video Art Department of Central Academy of Fine Arts of China, and now mainly works and lives in Beijing, Wenzhou and Europe. The artist’s chief mediums are video, installation and photography. Moveable maps are her current artistic orientation. She says that her working is like looking for markers and relabeling them in the fog. Her social upbringing, interpreted as a meridian, while ceaseless in wiping off her immediate past, acts as a coordinate. And where is her latitude of cognition?

Liushi is a small Chinese town, where 90% of the inhabitants are engaged in manufacturing electrical appliances.  The electrical products are sold all over China and all over the world.  The region is somewhat alienated from the social and political system but in its drive towards modern civilization has continuously been hindered by political constraints and economical ideology. The ideological mindset of the community has undergone tremendous change but the special geographical environment often triggers some sensitive emotions. Zhu Yu’s artistic motifs often portray industrialization, the masses and children’s misplaced memory of factory production lines. Zhu remove from reality the void and the passive, and analyze their historical roots and current mechanical and networked/digitalized shadows or the reversal thereof.